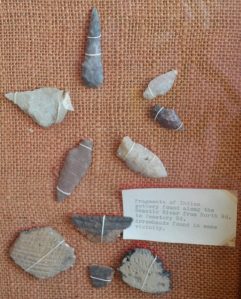 Among the earliest items on display are Native American artifacts, arrowheads and pieces of pottery, collected from along the nearby Scantic and Connecticut Rivers. Also on display a scale model of the Bissell Ferry, which crossed the Connecticut from 1641 to 1917 and a cannon ball fired from the river during the tensions before the King Philip’s War in 1676.  Out side the museum stands a 1765 post road marker from modem Route 5 which was the earliest in a series ordered by Benjamin Franklin in the Connecticut Colony.  East Windsor’s patriotic  role in all of the nation;s wars is reflected by a variety of weapons, uniforms, photographs, and military paraphernalia. also a little known fact about East Windsor: The earliest discovery of dinosaur bones in North America occurred here in town in 1818. They were found by Solomon Ellsworth Jr. on what is now Rye Street. Stop by the museum to see a cast of the fossils. The originals are down at Yale University in New Haven, CT.